Day 1 Monday
I noticed I started a weird dry cough that evening. Didn’t seem to be a reason for it. So I just ignored it and kept watching the rerun of Castle I was into. The new episodes have been awful… they split up over no good reason. Kind of like my cough.

Day 2 Tuesday
I started feeling like I might be developing some kind of ‘something trying to get me’ which could possibly have hitchhiked a ride to my office with some students who recently said they’d felt something, too. But in positive mind-over-matter mode ‘I never catch it- I’m bulletproof, I got this’… I ignored the danger like a female Bill Murray in the ‘Scrooged’ movie I just watched.

Just to hedge my bet, I began taking OnGuard (DoTerra), Kick Ass Immune (Wishgardens) and using my neti pot. I carefully disinfected mics, stands, surfaces and doorknobs in my office and took a few students, making sure not to touch or breathe on them. The last lesson of the night, I ominously noticed that I was starting to lose my speaking voice. Yes. Play the low warbly keyboard pad here.

Day 3 Wednesday
Cancelled all lessons. Dry hacking cough relentless, mucous around larynx thick, complete laryngitis set in. Voice rest is mandatory when you have no voice. Ate very light meals, including homemade chicken soup and potassium broth. (Thank you, God I had some in the freezer!) My husband got his pillows and moved into the guest room to keep my air separate from his. (Oh yeah I’d have done the same!) 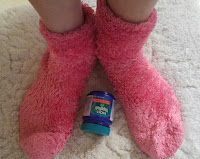 Took a hot bath with Epsom salts before bed, kept up with neti pot and herbs, salt water and raw cider vinegar gargle. Internet search for natural cough remedies suggested sleeping with Vicks salve or eucalyptus salve on the bottoms of feet. Socks were mandatory to keep the bedsheets from getting matted up with the stuff, so I went for my fluffy loose pink pair. Poor things, they’ll never be the same. I knew I’d be better by morning.

Day 4 Thursday
No better. Cancelled all lessons. Nothing stopped the constant voice-abusing dry cough. Again ate very lightly, including fruit smoothie, green drink and broth. My mother, still possessing her 6th sense intuition, called and upon hearing my lack-of-voice reminded me of 2 old remedies for cough she doled out when we were children: honey and onion, honey and whiskey. My internet search provided a recipe – apparently many mothers made the same discoveries and went on to teach digital age children who spread the word.

Went to the grocery for organic honey and red onions, liquor store for a small bottle of Jack Daniels. Also fresh ginger for tea. Gave the elderly bag man who helped me out to the car some of my hand sanitizer. Came home and made both the cough syrups. The honey and onion seemed to help calm the cough for the first time. The honey and Jack just made me feel tired and well, yes, I did sleep deeply. Still wearing the now salve-infused pink socks. Looking forward to feeling great when I woke up.

Day 5 Friday
Woke up coughing like I’d been water boarded, with horrible mucous still encasing larynx. Cancelled all lessons. When I asked, John said my coughing didn’t wake him… it was my snoring! He exclaimed slowly, with his eyes really wide, that he could not describe the decibels I reached. The way he said it brought up visions of a moose cow with bronchitis, maybe giving birth to quintuplets.

To speak still hurt from the laryngitis, so I went on voice rest most of the day. Kept up everything I was doing, but honey and onion syrup was the only thing that would touch the coughing. I actually felt better, and our son wanted to come for dinner, so I ate salmon, rice & veggies. Probably ate too much, channeling healing energy into digestion, because uncontrolled coughing and tight pharynx seem to worsen. Tried alternating food grade hydrogen peroxide with my salt- raw cider vinegar gargle – that always works! Didn’t. Slept with now freshly icky pink socks and knew this thing would be over in the morning!

Epson salts, pink socks, and I was sure tomorrow would be the turnaround.

Day 7 Sunday
Woke up and felt better in general, but laryngitis, dry cough and thick phlegm still there. Tried to rest. Didn’t have to cancel lessons, first day I mercifully didn’t have any booked! Kept up with everything on blind faith it was doing something.

Around midnight, woke up with a burning sore throat for the first time. UNFREAKIN’ REAL!! Looked in the mirror and my throat was beet red on both sides. What’s THAT about?!! Suddenly scared sick it was turning into strep or bacterial infection. Oh, and also coughing up green stuff. Desperately turned on computer, google searched and came up with the ‘garlic + honey + cayenne pepper’ remedy. Started off to the kitchen, tripped in the dark over the mini tramp in the hall I’d been using to try and move lymph fluid around. (Lot of good THAT did!). Somehow didn’t wake John. My snoring must have been IMPRESSIVE! Anyway, I lay there for a few moments counting ribs and letting the throbbing of my leg subside.

Didn’t seem to be any major damage, so I picked myself up, off to the kitchen to peel the garlic and, with mortar & pestle, fix the horrible tasting concoction. Mortar & pestle not very efficient at mashing the fresh garlic cloves, I had to chew the still chunky garlic before I could swallow it. My considered opinion is that John would rather die of pneumonia than take this stuff. But he’s a drummer, not a singer! Cautiously I took ¼ teaspoon of it and almost threw up. Shivered, walked around til things settled, back to bed. I wake up, I take ¼ tsp more, almost throw up, shiver til it settles, back to bed, to rinse and repeat all through the night. Not sure I even want to live to see how I’ll feel in the morning. Thinking ‘kill me now and I won’t have to take the next dose!’

Day 8 Monday
By morning, almost all of the redness and soreness was gone! So was the coughing! Chest congestion mostly gone, too! Some laryngitis still evident but no pain. Cancelled all in-person lessons to keep students safe; planned on giving an evening Skype lesson. The student cancelled because she has a sore throat! It’s everywhere.

Industriously I created more ‘torture cure’ adding lemon juice to the honey+garlic+cayenne and using an immersion blender this time to make it slip down more smoothly. (Found out it doesn’t help. Still nauseating) Made some homemade hummus and ate it with fresh veggies and corn chips. Then back to the garlic-honey-cayenne pepper torture. Wondering if I turn my naked back to the mirror I will see a hole has eaten through my inward parts. My taste buds, now numb as little doorknobs, are on strike. Can’t taste anything, but I have a distinct feeling there is a garlic cloud going before me every step I take. I must smell like a pizzeria on acid. Steering clear of John, who mercifully has a diminished sense of smell from sinus trouble!

Later that night, I noticed the side of my tongue was sore and the back of my throat was starting to get a little red. Panicked now. Went to the internet and AAAHHHH read that you CAN eat too much garlic and it CAN eat holes in your intestines (We all believe the internet, don’t we?) OK, hot epsom bath and no more garlic tonight… going back to the honey onion syrup and On Guard throat drops! Tomorrow, tomorrow… ok now I sound like Annie.

Day 9 Tuesday
I’m back!! Woke up after a restful sleep, cleared out my lungs/throat/nose with neti pot and some productive coughing, then felt great! It’s done, it’s done, just the dregs of the debris to get rid of. My head voice is back and talking feels fine. Thank God! I’m fresh with empathy for all singers and speakers who get colds! Time to begin gentle rehabilitation vocalises…

Conclusions:
– There is no cure for the a common cold. This respiratory virus is nature’s internal whisk broom, and everyone needs a housecleaning from time to time.

– Shortening it, protecting ourselves from bacterial overgrowth secondary infections can be possible. I hope there was a reason I ate that garlic!!! But if a secondary infection does brew, it’s time to see a doctor. If in doubt, check it out!

– Can’t believe everything you read on the internet, but it can be helpful if taken in careful doses.

– If it hurts to talk, stop using your voice! Cancel performances. No phone calls, no singing, vocal exercise should be stopped, don’t even listen to music. Voice rest, hydration and sleep are non-negotiable to create a short duration of viral laryngitis and keep vocal inflammation from turning into vocal damage.

This site uses Akismet to reduce spam. Learn how your comment data is processed.